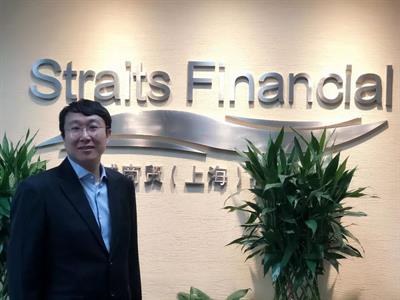 I. Expecting a new round of monetary and fiscal stimulus in EU and the US

The recent pandemic situation in Europe and the US has been different. Western European countries have improved as both the number of daily new infections and deaths showed a clear downward trend since late October (Figure 1). We think this is mainly due to a “stricter social distancing quarantine policy” adopted before, such as curfews, temporary school suspension and work from home arrangements. In contrast, the US has not taken strict quarantine measures, and its situation continues to worsen. In particular, we have seen a significant increase in the number of daily new deaths there since 2 weeks ago, which is now over 2000 a day (Figure 2). 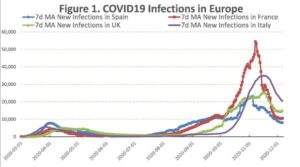 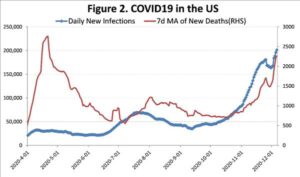 But as we have said before, the current global markets will not be too worried about the continued deterioration of the pandemic, because the real focus of the market is whether EU and the US will launch new rounds of fiscal and monetary stimulus policies, and the scale of it. Recently, there have been several “favorable” factors indicating that the chance of a new round of US stimulus policies is increasing after President-elect Biden swears in next January. These factors include:

Meanwhile, the US Congress will approve a US$1.4 trillion in federal budget funding before December 11 this week. The Republican Party’s intention is to include further anti-pandemic expenses into this budget, while the Democratic Party hopes to introduce more stimulus programs including direct subsidies to small businesses and households. We expect that the final size of the final new round of fiscal stimulus will exceed US$1 trillion, but it is unlikely to reach US$2 trillion.

In addition, the Fed meeting in December may introduce a new forward-looking guidance on next year’s QE. If the Federal Reserve shows an open attitude towards increasing the quantity of its bond purchasing or extend its duration (ie. buying more long-term bonds) after the launch of a new round of fiscal stimulus, it will also be favorable to the improvement of market sentiment. Considering that a new round of fiscal stimulus will continue to increase the supply of US Treasury debts next year, we think an increase of monthly QE in 2021 is quite likely. Separately, the European Central Bank may also adopt a new round of asset purchase plan at the meeting to be held on December 10, which plans to extend the current “Pandemic Emergency Purchase Program (PEPP)” into year 2022, so that ECB’s total asset purchase may increase to nearly 2 trillion euro, while the current PEPP is only planned to be implemented by June 2021, with a scale of about 1.35 trillion euro.

The current overseas market situation is still more favorable for risk assets such as industrial commodities and stocks. First of all, after this year’s violent market ups and downs, global investors have fully realized that loose monetary and fiscal policies rather than economic fundamentals and pandemic situations are the core driving factors to decide the current global risk asset prices. From the specific indicators, the year-on-year growth rates of M2 of the three major overseas economies in Euro Zone, the US and Japan are now all at their historical highs, and are significantly higher than their economic growth level (Figure 3). This means that a large quantity of surplus money not absorbed by the real economy have continuously been flowing into the capital markets, which makes the current global asset bull market still difficult to find obstacles to stop. 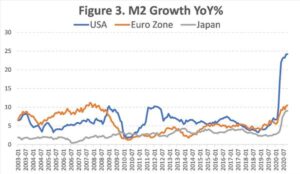 At the same time, the inflation expectation reflected by TIPS in the US only returned to its normal level before the pandemic, which is not enough to arouse the market’s concern about the tightening of the Fed’s monetary policy any time soon (Figure 4). We can also see that the nominal interest rate of US Treasury bonds still kept low despite all the recently heated “recovery hopes”, which is good for stocks and commodities.

At the same time, despite a worsening pandemic, we can see that the default risk expectations in the US as represented by the credit spread of high-yield corporate bonds continue to improve, indicating that the market is not worried about the negative impact of the recent rising infections on the overall economy, or that the next round of fiscal and monetary stimulus will help most corporates to avoid major credit risks. Therefore, after the November election, the credit spread of BB grade high-yield bonds in the US has further tightened by about 80bps (Figure 5, the red line below), which is now only slightly higher than the level before the outbreak of the pandemic.

Conclusion: we believe that under the circumstances of extremely ample liquidity, rising stimulus expectations, and market expectations for next year’s economic recovery due to stimulus and vaccine, we remain bullish on the overall performances of overseas stock markets and commodities.

We are also bullish on the domestic China market on the whole, but it may be slightly weaker than that of overseas markets, and we prefer commodities over stocks domestically. At present, the main factors restraining the domestic market performances are as follows:

Different from the worsening situation abroad, China’s pandemic control is one of the more successful in the world. With the drastic recovery of domestic economy and rising exports, Chinese authorities have changed their policy stance to neutral, which is a common practice in China.

The historical Chinese credit expansion cycle shows: in each round of rapid social financing and monetary expansion (etc. the incremental total social financing increased by more than 40% yoy), a more stringent policy stance to “stabilize leverage” and “restrain excessive asset price inflation” will always be adopted in the following year. This year, the same as in 2009 and 2017, the growth rate of total social financing exceeded 40%, while in 2010 and 2018, credit was tightened in China (Figure 6). Therefore, we think that in 2021, we are likely to see tighter credit, resulting in a flat or even decreasing incremental total social financing growth next year. However, thanks to rising exports, real estate investment and consumption, as well as inventory rebuilding after the pandemic, we believe that Chinese economy will continue to grow relatively rapidly, at least until the 2nd quarter of next year, even under tightening policies. However, this also means that, at least until the middle of next year, a relatively tightening policy stance will be with us continuously. Therefore, we think, in this period, it is very difficult for the overall domestic stock market to rise substantially. 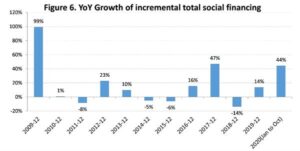 However, we believe that a short-term liquidity improvement will provide major tradeable market opportunities in the next few months. And the one we can see now is between the year-end and Chinese Spring Festival. This is because: by the end of 2020, a concentrated fiscal spending may bring about an improvement in domestic market liquidity. At present, the total government fiscal savings is as high as 5.6 trillion RMB, which is close to its highest level in history. In addition, the completion percentage of budget expending this year is still quite low. Therefore, we expect that there may be nearly 2 trillion RMB fiscal spending in the month of December (compared to 1 trillion RMB in December 2019). And these money will be given mostly to corporates and households around the year end. Secondly, the loan quota of 2021 will be released in January. As most people generally expect that the credit will be comparatively tight in 2021, the desire to secure funding as early as possible will be quite strong. Therefore, we may see a rapid growth of incremental loan demand before the Spring Festival. These factors may combine to provide a better market liquidity situation between the year-end and Spring Festival. And this may be the best period to buy and hold A-shares during the next six months.

We are optimistic that Chinese A-shares as represented by Shanghai Composite Index may rise to about 3700 or even a little bit higher before the Spring Festival. The recent rise of A-shares is not accompanied by a substantial increase in its turnover rate (Figure 7). Similarly, the margin account balances are also stable (Figure8). This is completely different from the situation when A-shares approached new highs several times in the past, indicating that the market has not been overheated. So we think the current trend of A-shares is relatively healthy, this round of “slow bull market” will sustain till Spring Festival. 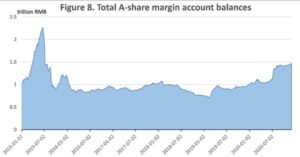 For Chinese domestically traded commodities, we are bullish till Spring Festival. In addition to the above-mentioned reasons for being bullish, the current combination of strong demand and relatively low inventory levels of industrial commodities driven by real estate investment and exportation is expected to continue to promote the optimistic expectations of the market. Until the domestic credit tightening begins to strike on the demand side, or the increase of overseas commodity supply appears. Judging from now, for most commodities, these above-mentioned possibilities will not happen at least until the second quarter of next year or could even later. However, some commodities, such as crude oil, may see more resistant price ceilings, as its supplies overseas are more likely to be back online.

As to RMB, if Europe and the US launch a new round of fiscal and monetary stimulus policies, the RMB is expected to maintain its strength against the US dollar.

2006, obtained MBA degree from Wisconsin School of Business at University of Wisconsin–Madison.

August 2007 – July 2013, served at China International Capital Corporation (CICC) as the leader of the overseas strategy team and A-share strategy team. He is also the main report writer and contributor. Mr. Hou and his team received many honors including the top team for the New Fortune Sell-side Strategy Research in 2008, and the top team for the Asia Money China Strategy Research in Hong Kong in 2009 and 2012, etc.

September 2013 – December 2019, served at Discovering Group and was responsible for the Group’s macro strategy research. During the period, the company has accumulated absolute returns that far exceed the market level.

This document is issued for information purposes only. This document is not intended, and should not under any circumstances to be construed as an offer or solicitation to buy or sell, nor financial advice or recommendation in relation to any capital market product. All the information contained herein is based on publicly available information and has been obtained from sources that Straits Financial believes to be reliable and correct at the time of publishing this document. Straits Financial will not be liable for any loss or damage of any kind (whether direct, indirect or consequential losses or other economic loss of any kind) suffered due to any omission, error, inaccuracy, incompleteness, or otherwise, any reliance on such information. Past performance or historical record of futures contracts, derivatives contracts, and commodities is not indicative of the future performance. The information in this document is subject to change without notice.

Straits Financial is among the first batch to trade DCE RBD Palm Olein Options for our client CCFT.